Editor's note: Welcome our latest post in a regular series where we invite members of our team to talk about One Cool Thing (not necessarily from games) and if/how it influences/reflects on their work. While we're not able to talk about the exciting things we're working on right now, we hope this will be a nice little series of introductions to the interests & practices of our excellent team.

Here's our Assistant Producer, Úna-Minh Kavanagh, on being content and alone with your thoughts.

A Walk in Kerala

I’m at my happiest when I’m alone with my thoughts. Not all the time, but in general my creative energy comes from quiet, small, thoughtful interactions with the world. I like to vanish and absorb the world in that state. And in that spirit: for my One Cool Thing I'd like to share with you a walk I once took on the vibrant streets of Thiruvananthapuram, in the Kerala province of India.

In March 2017, I visited Kerala, and took a walk along the dusty paths by the coast in Thiruvananthapuram.  I was on a group tour, but I decided to separate from the group to explore on my own. When I get curious, I feel like I disappear for a while, and that didn't feel like something I could do as a group; so I walked. And as I walked it felt like reality split away into two worlds: I left behind the tourist Thiruvananthapuram, and found a place less opulent, less of a construct for tourists; not just a straight line, but made of many different paths.

Of course while I’d like to imagine that I was ‘incognito’ for my morning ramble, I was nevertheless a foreigner touring in India. Not only was I clutching a clunky DSLR camera, but I was also wearing cargo shorts and oversized sunglasses. I was someone that local Keralites could spot a mile off. So I don't mean I vanished to them, but for me it felt like sinking deeper into the place.

Greeting people with a ‘namaskaram’ (a polite greeting) and a smile, an older man soon jostled up to me with an inquisitive look in his eyes and clutching a bag of bracelets. Where was I going? He wanted to know. How long was I here for? Did I want a tour? I politely declined and continued to weave the walkways.

Hot tea sat on a window’s ledge as a woman hummed to herself; the sun beat down as on my path as a dog rooted through a pile of plastic. I wandered and collected the moments like photographs. “Namaskaram – hello!” I repeated. I drifted about and moved towards things I was drawn to. I wasn't 'at work' or on a deadline like you often are when you move through a city; I followed my interest rather than any specific route.

When I think of my ideal creative process I think of this walk. I think that's because in my memory it exists as a series of vignettes, revealing itself to me, unravelling, in a way which was natural and easy. That quality of moving towards the things that intrigue me; trusting in the flow: that's is something I aim for when I write.

And that’s how I ended up in Ish’s shop

The key to shopping for clothes in India (and indeed like my shopping experiences in Vietnam), is to act as if you’re not interested and be as vague as possible. It’s a skill which I felt well-versed in and ready to practice. So of course rather than looking at clothes, I chatted to the purveyor about anything but.

Ish was handsome with a broad, welcoming smile and thick black hair. His shop was laden with clothes and jewellery. We started chatting outside and as we discussed in-depth about where I had been in Kerala, I found myself gushing about the mountains of Munnar, Aleppy’s quiet backwaters and mere glimpses of Kumily.

“But have you been north?” he asked. I admitted that I hadn’t.

“You must!” he enthused. “Snowy mountains – fresh air for the soul. It’s great. Do you mind if I show you where?”

He beckoned me towards his shop and flipping on the air conditioning (I was still a tourist, after all) he produced a book on India.

“This is Kashmir where I’m from,” he announced, prodding a finger at the well-thumbed pages.

And there they were. Snowy slopes, pristine lakes and an exceptionally blue sky. It did look marvellous. And as someone that prefers cold weather to hot, I was already jealous.

I asked him what he was doing in Kerala rather than Kashmir and he answered: “I follow people like you!”; he spends ten months of the year down in southern India. He follows the tourism season and the ‘money trail’.

We spent over half an hour shooting the breeze without a question of shopping. His good nature made me want to linger and I almost forgot his wares.

I eventually picked out a red kaftan that I liked and tried it on.

His smile broadened and a laughed escaped his lips, “Well, 2000 rupees would be mine, but I don’t think that would be yours.”

I smiled – he knew the game and was willing to play. To-ing and fro-ing we eventually settled on a price much lower than the quote but a fair one nonetheless and he added a magnet for good luck.

Handing me a bright, yellow bag, I left with a spring in my step back through dusty paths. I had found my flow, and it had taken me to Ish. He wasn't an end point, but a moment of connection.

When I sat down to think of 'One Cool Thing' to offer you, I thought of this walk, Spring of 2017, in Thiruvananthapuram. I think about moving through those dusty streets, how it felt. That's my ideal form of creativity: wandering, playful, flowing, connecting. Vanishing everything but the here and now: trusting in my feet. 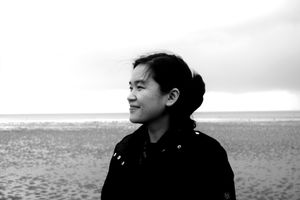