Editor's Note: this is a reflection from Ida Hartmann, our first Writing & Narrative Design intern, on how she found the process, what she learned, and how she hopes to carry it forward in her work. You can read more from our intern process via this tag. Enjoy!

Embark on a hopeful journey through terrific Danglish language, transformative peer mentorship, and a ton of tricky variables in our heroine’s quest for professionalism and a future in the game industry. An intellectually stimulating, sometimes uneventful, and humorous point-and-click-click-click puzzle adventure where the protagonist struggles with writing dialogue and choices while juggling scripts and shadows of her past.

= ContinueReading
Okay. We can continue.

I’m sitting in a house north of Copenhagen. It’s summer. The ocean tastes salty, the birds chirp loudly, my ankles already swollen with mosquito bites. Last summer I was sitting in the same house with bleeding gums and shaking hands, preparing the release of my first game Stilstand. My teeth luckily stayed in place and now, a year has passed, and I have transformed professionally. In this blog post, I will reflect on how my internship the last five months at Die very Gute Fabrik has helped me to this point.

When I first arrived at Die Gute Fabrik's doorstep, I felt like a stray cat: slightly shabby and (professionally) homeless. Stepping into the Fabrik was like stepping into a safe home with soft furniture and milk (I'm still a cat in this analogy), where I could piece myself together under the careful guidance of experienced cat-carers. Instead of splashing directly into a demanding game writer and narrative designer position, I got the wonderful opportunity to be an intern.

A freeing aspect of being an intern is being in a learning position - the possibility, (almost demand) of testing yourself, and experimenting with the freedom to fail safely. While some companies mistake an intern as a way to exploit free labour, Die Gute Fabrik’s internship was an actual apprenticeship - giving me the much-needed space to grow and develop as a writer and designer. And not only this, the position was also paid, which made the freedom and room for growing even bigger. In other words: A huge and rare privilege.

The internship wasn’t defined beforehand, instead, it has been in a constant shaping process aligned with both me and Die Gute Fabrik's needs. I was met with a lot of patience and guidance, having been thrown into a completely new territory of writing dialogue (in British English!), and handling files and variables in their dialogue editing systems, all while reflecting on my creative processes, past and present.

In Denmark, our popular culture is extremely influenced by both British and American language and culture - from when we are children the English language is present everywhere. But - even though my favourite movie aged 10 was Bridget Jones' Diary - it hasn’t made me fluent in writing English. So getting used to a writing environment that eventually needs perfect British English (no American!), I panicked: Can I somehow take a quick crash course in British culture in order to become that fierce, poetic game writer I’ve always dreamed of being? ... Reading Shakespeare, watching Barnaby, chanting my favourite sitcom quotes with a horrible accent, and and and -

I hyper-focussed at the beginning on writing because of this. I wanted to write in perfect English. But with the help of my mentors, I was able to quickly realise that truly immersing myself in the language to this end would have to mean some drastic changes to my life - perhaps moving to an English talking country, simply just stop talking Danish and then... of course, buying a fancy bowler hat.

After realising that I will never become a new Shakespeare (or buy a bowler hat), it became much easier to produce written content, knowing that there was a whole structure around writing in the game. It wasn't just me in there - the native speakers would Britishfy my language in a polish phase. The best thing for me to do was to just write. By collaborating with other amazing and experienced writers, we could all contribute, discuss, redraft, polish. Having always worked alone, this has been a tremendous experience and eye-opener. I understand now how valuable collaboration with others can be.

I learned a new term: Narrative Designer. A role I did not understand until I started at Die Gute Fabrik. In the past, my work has been under mishmash of different titles, but funnily enough, never Narrative Designer. I learned that Narrative Designer is a role that fits well with a person who is good at world-building, character development, and creating structures for storytelling.

Because I had the possibility to try different parts of the disciplines of game writing and narrative design, I found that I actually make a great Narrative Designer. Through the guidance of my mentors, I was helped to understand where my strengths are, which has been exciting to pin down and explore. I found that I'm very good at:

I realise that this is also how I’ve always worked; both as a comic writer and illustrator when approaching and working my imagination. Creating worlds, moods, characters, story structures, getting fun and weird ideas for stories. Now that I have learned what Narrative Designer means, I only wish to become better at it and see where it takes me.

While experimenting and growing as a writer and designer by working on the TBA game from Die Gute Fabrik, I also had the privilege to be mentored by Studio Lead Hannah Nicklin. Our mentor talks gave me a lot of great tools on how to create stories and structures, from figuring out a strategy for developing seeds for stories, characters, voices, to formalising a creative process, and developing a story vocabulary. We set homework and deadlines together, helping me to create something, structure it, plan it, and push my craft forward.

The company also sent me books on script writing, artistry, and creativity, in order for me to formulate my own journey as an artist, inspire me, and encourage me to find ways to plan a bit ahead. Being a “go with the flow” kinda person (aka. chaotic), it was both daunting and wonderful to try express what do I want, what kind of life do I want, who do I want to be, what’s important, etc. through the lens of my storytelling practice.

I also gained a deeper understanding of the game industry and what one can encounter in terms of challenges, both emotionally and legally, especially as a woman and story-focussed professional. Sometimes this would feel like an extremely tall, impossible mountain to climb - and honestly very exhausting. But I learned how valuable and important a network and support system is, in order to stay on that mountain, to find camps to rest in along the way.

It has been a privilege to be a part of such idealism and I feel that I take those same demands, that openness, and awareness with me as I continue on my journey.

Now we reach the moment that I get tossed (not really, but I like the image of it) out on the other side, standing much stronger than before, two feet on the ground and able to move forward. I feel like a little wooden figure who has finally been sanded and varnished, ready to work and truly understand my work, far more than when Stilstand was released.

This is what I know: I want to work in companies that, like Die Gute Fabrik, prioritise a healthy work environment, employee wellbeing, and rights, and have an appreciation of the artistic dimension of a game.

Luckily I now plan to join the award-winning indie studio Triple Topping for a while, where I’m excited to use my new skills as a narrative designer in practice. Six months ago I wouldn’t feel as professional as I do now, going into a job like that. It’s incredible how much more confident I now feel, equipped with a vocabulary, industry insight, structured design processes, and a caring support system.

So here we are, at the very end, though it’s not Game Over or Play Again. Instead, it is:
[Start Next Chapter]
How thrilling! 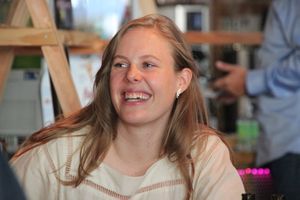 Ida Hartmann
Comic artist and game writer from Denmark. In 2020 she had her debut as a game writer and artist with the autobiographic interactive graphic novel, Stilstand, made in collaboration with Niila Games.
Twitter RSS
/
Copenhagen, Denmark
/
https://www.instagram.com/idamahara/
More posts by Ida Hartmann
Twitter Facebook Pinterest Reddit
Die Gute Fabrik