Welcome to the Evolution: Mutazione series, a new series of blog posts where Mutazione Creative Director and Die Gute Fabrik founder Nils Deneken deep dives into the early days of the development of the multi award-winning Mutazione. This is the second post, to read the first, head here.

Last week in the second episode of our podcast series “The Radio Tower”, about the early days and music of Mutazione, Alessandro (Composition and Audio Design), Douglas Wilson (Audio Engine Programmer and Design) and I (Creative Direction and originator) talked about the musical gardens of Mutazione.

In this article, I will dig deeper into the gardens, reflecting on what consequences the gardening mechanic had for the story and the game in general, and share a selection of my early sketches and concepts for the gardens.

In the last article, I wrote about the early days of Mutazione, back when the game was a platformer with story elements, similar to games like Flashback or Another World. After our work on the initial prototype in 2009, I was involved in a different project, which put Mutazione on hold for a while. The initial team, (besides our composer Alessandro) had departed from the project, and there was time to rethink the concept.

Around 2011, Douglas Wilson joined me at Die Gute Fabrik and we started talking about what the unique gameplay hook of Mutazione could be. The idea of plant growth as a key mechanic had been in the discussion for a while, but it was then that the idea of gardening came up for the first time. Gardens made a lot of sense in the lush game-world of Mutazione, but these gardens needed something special.

We settled upon the idea of a garden that was able to create its own music. I remember that I immediately imagined some kind of greenhouse with a lot of insects and creatures in it emitting sounds. I also remember thinking about a game jam game that was made by Nicklas Nygren and Steffi Degiorgio, called Tikkiit. They called Tikkiit a ‘life simulator’, in it, the player was able to control the various parameters of an ecosystem. The delightfulness of this simulation (besides Steffi’s lovely illustrated world- and creature design) lay in the fact that each organism also emitted their own sounds or snippets of music.

We took those initial ideas to Alessandro, and Doug and Alessandro tinkered with the music-theoretical design of the gardens. They limited the musicality of the gardens to the plants, but added more variations to the kinds of sound they produced by introducing growth stages and the ‘seven moods’ which you see even now in the finished game. The seven moods represented different types of musical harmonies the plants would have. And while musically they were represented with different harmonic keys, visually they had different colour palettes and appearances.

The musical gardens and their complexity were taking more and more of our focus (because we were very excited about them). Their playfulness was appealing and they were beautiful as a musical tool, but I was getting worried about the impact on the project as a whole. The intention of Mutazione was to create a world with characters and a story that you could play through. I wanted platforming and action-filled gameplay with life-and-death stakes. I had imagined a mutant village in the centre of the game-world, filled with characters with their own stories and daily routines. And now we wanted to introduce these gardens, with their own musical system of seven moods and elements of ecosystems.

We decided that our priority was to create a game that had a different pace, something that wasn’t frustrating, in which you couldn’t get stuck, and so it made the most sense to abandon the platforming elements. I wanted to create organic and beautiful environments and not have to think too much about platforming logistics, level designs, learning curves etc. The goal of creating an organic world also seemed to clash with the precision paradigm of platforming, where it’s important to signal which areas are traversable and which are not, and where a misstep means instant death. Besides, the village of Mutazione was supposed to be the centre of the game. It felt more important to be able to tell stories, and get to know the village’s characters, than to use our resources to build a platformer (of which there was a surfeit in the indie space at that time). With the gardens we had a strong mechanic that gave our game that unique hook we were in search of.

This meant that the gardens would take on a more prominent role in the game. The consequence of this was that we needed to integrate the gardens meaningfully into the game’s story and give their underlying game mechanic of the seven moods a purpose. The gardens needed to be central to the main story of the game, if we wanted this mechanic to connect with the rest of the Mutazione world and story.

That’s why I decided that we needed seven garden spaces around the game world. The idea was that the player would have to plant seven gardens, each in a different mood to solve the world’s mystery. This was not a conscious decision, but more the game itself dictating what we needed to do. It was the consequence of a previous decision made by Doug and Alessandro to have seven different moods in the gardens. If there had been three moods, there would only be three gardens in the story of the game!

You can look out for an upcoming article from our eventual Writer & Narrative Designer Hannah Nicklin on the integration of the seven gardens into the narrative design of the game. And in the meantime, don’t forget to check out the accompanying podcast, Episode 2 in our series focussing on the early days, and music of Mutazione.

Also, there is more to share than I could fit into a series of blogposts, so if you're interested in seeing more past sketches, concepts and discarded ideas of Mutazione's development, follow me on Twitter @NilsDeneken. 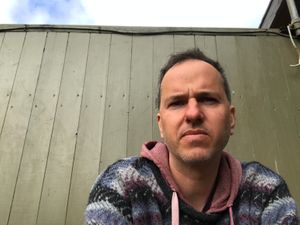